The 4IR and possible impacts on mining

Professor Klaus Schwab, Chairman and founder of the World Economic Forum (WEF), coined the phrase “fourth industrial” revolution (4IR) in 2015 in his seminal essay: “Mastering the Fourth Industrial Revolution,” which became a core debate in Davos in November 2016.

Schwab argues that the 4IR is different from other previous revolutions because of the scope, scale and speed with which digital technology and capabilities will impact and disrupt society: 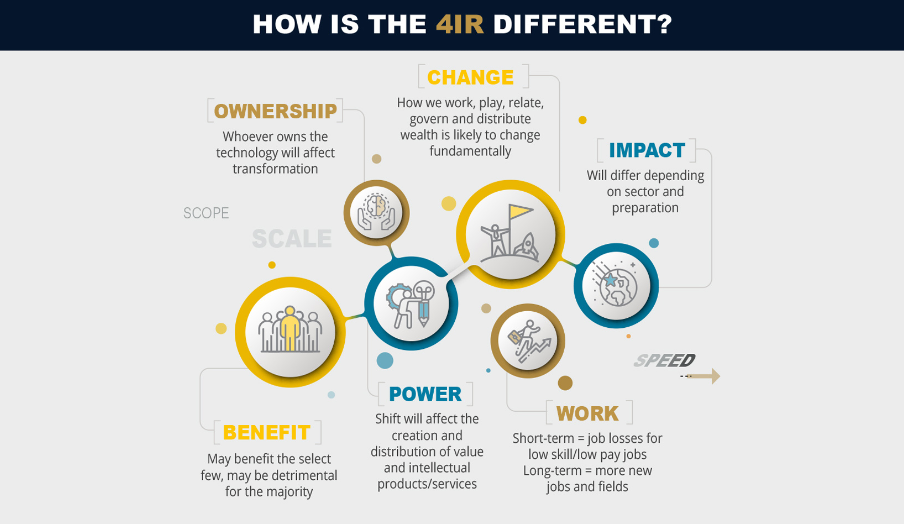 So, what are the implications for mining?

In an interview on CNN on 24 September 2019, the Global Managing Partner of internationally renowned consultancy McKinsey, Kevin Sneader, stated that the 4IR would impact 60% of jobs globally. Such jobs would either be redundant or capable of automation. It is fair to assume that the pattern will be the same for mining.

Since the commodity and financial crisis between 2008 – 2012, mining companies have embarked on a process of improving operational efficiency, effectiveness and cost saving. One strategy, which many mining companies have followed, is the concept of digital transformation to reach the status of an “intelligent mine” or the “connected mine.”

From this perspective, mining companies have begun, to a large extent, to embrace the 4IR mainly for survival, maintaining competitiveness and for fear of being left behind relative to their peer group. The fact that some mines (particularly in South Africa) are more mature, deeper and more expensive to operate than in other jurisdictions in Africa and elsewhere, has resulted in mining companies adopting various elements of the digital transformation strategy.

Much of this effort has focused on fleet management and predictive maintenance as well as C&I systems that allow companies to present their operational data in visual form (such as dashboards) in a control room environment. This assists them with real-time data for improved operational diagnostics and decision making.

Some companies have gone further by focusing on the “connected mine”, particularly by using cloud-based solutions and data analytics. Examples of mining companies that have followed these digital transformation initiatives include Debswana, Exxaro and Vedanta.

Many companies such as Vale in Moatize make extensive use of drones for mapping and surveying, which in itself is not new, but the cloud-based technology utilised for analytics and interpretation is becoming increasingly 4IR.
Other mining companies have focused on driverless mining trucks, autonomous production drills vehicles and renewable energy. The energy crisis in South Africa surrounding power utility, Eskom, has resulted in mining companies looking to solve their own energy security needs. This includes using solar and wind energy and as well as investigations into hydrogen fuel cell technologies to improve energy costs, reduce diesel emissions and carbon footprints. Anglo Platinum in South Africa has, in particular, been at the forefront of developing hydrogen fuel cell technologies for electric vehicles using platinum as a catalyst.

Internationally, Fortescue iron mine in Australia has pioneered the use of autonomous haul trucks in its operations: its fleet of driverless trucks has moved more than 860 Mt of material, travelled more than 28 million km between 2012 and 2018, increased productivity by 30% and improved the company’s overall safety record. Significantly, the fleet is operated remotely from Perth and the company has invested in redeploying and retraining more than 3000 of its existing employees to make the system work.

At the recent Africa Mining Summit held at the end of September 2019 in Gaborone, Botswana, Professor Frederick Cawood (a Director from the University of the Witwatersrand’s:

Mining Institute) argued that the 4IR’s impacts on mining may include the following aspects:

South Africa is strategically poised to benefit from the growth trajectory of the platinum-group metals (PGMs) sector, as it holds about 80% of the world’s PGM resources.

Rather than requiring fewer commodities, the green economy, and its resulting technological developments, will actually require more commodities, says specialist…

Mining and the circular economy – debunking the myths

First things first, while “circular” and “green” are often used interchangeably, it is important to distinguish between them. The UN…

Eskom and the coal industry are at the core of the just transition. Approximately, 75% of our electricity is coal…

A close shave…or too close to call?

Ever wonder, what we as South Africans are really good at? No, it’s not rugby, although sometimes we are like…

Read More
We use cookies on our website to give you the most relevant experience by remembering your preferences and repeat visits. By clicking “Accept All”, you consent to the use of ALL the cookies. However, you may visit "Cookie Settings" to provide a controlled consent.
Cookie SettingsAccept All
Manage consent

This website uses cookies to improve your experience while you navigate through the website. Out of these, the cookies that are categorized as necessary are stored on your browser as they are essential for the working of basic functionalities of the website. We also use third-party cookies that help us analyze and understand how you use this website. These cookies will be stored in your browser only with your consent. You also have the option to opt-out of these cookies. But opting out of some of these cookies may affect your browsing experience.
Necessary Always Enabled
Necessary cookies are absolutely essential for the website to function properly. These cookies ensure basic functionalities and security features of the website, anonymously.
Functional
Functional cookies help to perform certain functionalities like sharing the content of the website on social media platforms, collect feedbacks, and other third-party features.
Performance
Performance cookies are used to understand and analyze the key performance indexes of the website which helps in delivering a better user experience for the visitors.
Analytics
Analytical cookies are used to understand how visitors interact with the website. These cookies help provide information on metrics the number of visitors, bounce rate, traffic source, etc.
Advertisement
Advertisement cookies are used to provide visitors with relevant ads and marketing campaigns. These cookies track visitors across websites and collect information to provide customized ads.
Others
Other uncategorized cookies are those that are being analyzed and have not been classified into a category as yet.
SAVE & ACCEPT
Scroll To Top